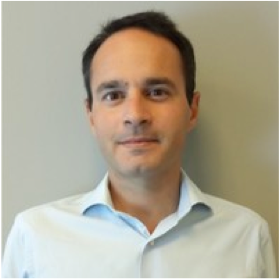 Dr. Panagiotis Vartholomeos received the M.Eng degree in Electrical & Electronic Engineering from Imperial College London in 2001 and his PhD in Mechanical Engineering/Robotics from the National Technical University of Athens, in 2007.

Since June 2021 is an Assistant Professor of Robotics, in the Department of Computer Science and Biomedical Informatics, at the University of Thessaly, conducting research on robotic systems’ design, modelling and control, for biomedical and healthcare applications. From February 2019 until June 2021, has worked as a Principal Investigator at TWI-Hellas (Athens, Greece). His responsibilities included technical management of research projects, research on modelling and control of robotic systems, and writing of research proposals for grant acquisition. From January 2014 to January 2019, has worked as a Senior Researcher at the R&D and European Projects department at SingularLogic S.A, where he participated, as a research team leader, in EU research projects in construction robotics and in robotics for the healthcare sector (assistive soft-robots, mobile robots for healthcare logistics). During 2016 and 2017, has worked as an Adjunct Lecturer (on a contractual basis) at the National Technical University of Athens, where he taught courses related to electrical machines and drives. From January 2010 till September 2012 worked as a Research Fellow at Harvard University and at the Cardiac Surgery Bioengineering Lab at the Children’s Hospital Boston (a Harvard Medical School teaching hospital), where he conducted research on Image Guided Minimally Invasive Surgical Robots, under the supervision of Prof. Pierre Dupont. Panagiotis Vartholomeos has been the author of more than thirty-five peer reviewed publications in journals and international conference proceedings and has more than four hundred (non-self)citations. Has been nominated four times finalist for best paper award in top robotic conferences, such as IEEE ICRA and IROS.