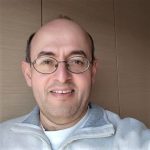 Konstantinos Tsoukatos is an assistant professor with the Department of Computer Science and Biomedical Informatics, University of Thessaly, Greece, since September 2019.
His interests are in communication networks and applied mathematics.
From 2008 to 2019 he was an assistant professor at the Technological Education Institute of Thessaly.
He was an adjunct faculty at the Electrical and Computer Engineering Department,
University of Thessaly, from 2003 to 2009. He was a research associate with the National Technical University of Athens in 2000-2001.
He received a Diploma from the National Technical University of Athens in 1992,
a MS and a PhD in electrical engineering from the University of Maryland, College Park, in 1994 and 1999.
He has been a recipient of a Eugenides Foundation Scholarship in 1992, and a top-5 finalist in the 1997
International Teletraffic Congress student paper contest.