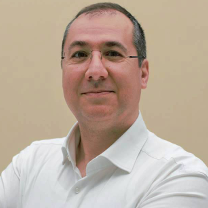 Dr. Athanasios Kakarountas (S’98-M’04-SM’12) was born in Lamia city, Greece, He holds a Diploma (1998) and a PhD (2004) in Electrical & Computer Engineering from the University of Patras, Greece, and an MBA (2015) form Cyprus Open University. He is currently an Associate Professor at the University of Thessaly, holding a position for “Embedded Computing Systems” at the Department of Computer Science and Biomedical Informatics. He is the Head of Intelligent Systems Laboratory-ISL, Chair of the Research and Innovation Regional Committee for the Region of Central Greece and the Vice-President of National Infrastructures for Research and Technology (GRNET). In parallel to his academic career, he has served as a Director for Strategic Development of the Patras Science Park (2007-2008), as a tutor and auditor of the educational material of the Hellenic Open University, and IT expert for the Region of Western Greece and the General Secretariat for Research and Technology (GSRT) of the Greek Government (2007-2008).

His research interests are focused on Computer and Embedded Systems Architecture, VLSI Circuits & Systems Design, Low-power Design and/or Design-for-Test, and Design of Hardware Accelerators for a variety of applications (e.g. image processing, cryptography, medical devices etc.). As a researcher he has participated in 20 research projects funded by EU and the Greek Secretariat for Research and Technology. He has published moiré than 90 articles in international journals and conference proceedings. His research has received more than 700 citations. He is also the co-author of 4 chapters in technical books.

He is a Member of IEEE since 2004 (student 1998, Senior Member since 2012), of IET and Senior Member of ACM. He is reviewer in 10 magazines and journals and a permanent reviewer to more than 10 conferences. He has been member of the Organizing Committee of numerous IEEE conferences. He is a judge in WRO Hellas, Open Robotics Contest, and the founder of creative team A2rTEST. He is also in the organizing committee of TEDxLamia, Central Hackathon and has served as Mentor for various creative teams in Contests and Hackathons. He is also the recipient of 3 international awards and 2 national awards. Dr. Kakarountas serves as delegate of Greece at the IEEE Region 8 Committee Meetings since 2008. Currently, he has been elected in the Board of the Greece IEEE Section and he is the interim chairman of the Consumer Electronics Society – Greece Chapter.